This blog chronicles my projects, developments, and all things related to tabletop gaming. I will try to avoid rants and reviews. Mostly games I'm developing, and progresses from my campaigns.

So to get a few things in order on this blog first. A few project updates.

So I cut my losses on the printer, and sold it on ebay as-is for about 70% of what I paid for. I may get into 3D printing still in the future, but right now it is out of reach. At least I tried. I really really tried. It was a bitch to work with, but I tried. The technology just has not caught up to the user friendly+quality level I was looking for.

Adventures of a C.P.A.
That campaign ended its season 1 with a lot of surprises. Flint had been working on a personal project this whole time, a giant clay golem that he bonded to his mind for control. This office worker/wizard was pushing his limits with the project, and thanks to constant help and knowledge from 'Tim', he was able to get a working model. The golem came into play during the season finale. A lot of buttkicking needed to be done, and with the help of the golem, Flint was able to carry himself in a fight. Until the very end.

It turns out an ancient presence was trying to break through the world, and all the magic use was gearing toward that. A sacrifice must be made every seven years. The 7th son of a 7th son is to be sacrificed to keep the current status quo. There were groups who wanted it to happen, and groups who didn't. With one, things would remain as they always have. With the other a change would occur in the world, we were just not sure what that chance would be. Flint is the 7th son of a 7th son, and knew what he must do. It was either him be sacrificed, or a little boy they had helped previously. He offered himself as a sacrifice, bled out into the swirling portal below in the Sears Tower, and died.

He then awoke. However he did not wake in his flesh. The surroundings were familiar to him, but the body was not. He found it was a body of clay. A body sculpted by an amateur sculptor, and runes inscribed allover to give it animation. The runes were his. The body was his golem.

Stay tuned for season 2 in a few years... hopefully.

Star*Drive Stuff
Speaking of seasons; after the modern fantasy campaign, we went back into another fantasy campaign that we started before. Sort of a science fantasy campaign I came in on halfway through before the adventures of Flint Richards. Our groups intention is to finish this campaign up, tie the loose ends, reach the epic conclusion, then it will be my turn to GM.

I am excited because I will be running a campaign in one of my favorite settings of all time: Star*Drive. Our intention is to use the FATE roleplaying system for some good narrative action. The group so far likes the idea of being a band of outlaws from their patron nations, and trying to survive and make a living in the Verge. I will keep this blog updated when we get to start that campaign with some developments.

Other Projects of Jarom and I
Jarom and I are still flexing our creative muscles on the various ideas and projects we have rolling around in our heads. He's still sketching and we're still brainstorming. However the Warhammer bug has bit him too. His attention has been focused lately on his Orks, and he has built quite a collection of them. Like me, he's really into conversions, and I will be featuring articles about his works on my other blog.
Posted by M. Jared Swenson at 1:42 PM 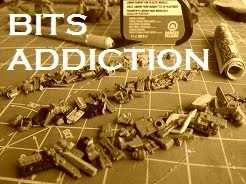 For my miniature painting and conversion projects